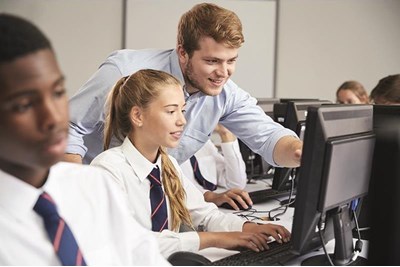 By Balfor Team8th February 2019 No Comments

A new Early Career Framework is to offer teachers a two-year induction, with trained mentors, structured support and tax-free retention bursaries from 2020 and 2021. Pete Henshaw takes a look.

A funded two-year induction support package for all new teachers, retention bursaries, specialist qualifications to support teachers to stay in the classroom, and a proposal to scrap floor and coasting accountability standards.

These are among the measures in the government’s long-awaited Teacher Recruitment and Retention Strategy, which was published on Monday (January 28).

At the heart of the strategy is a new Early Career Framework (ECF) – also published on Monday – which will “underpin an entitlement to a fully funded, two-year package of structured support for early career teachers linked to the best available research evidence”.

The strategy states: “We are extending the length of the induction phase so that all early career teachers will receive a sustained and structured package of support over the first two years of their career. Our vision is for the ECF to build on high-quality initial teacher training and become the cornerstone of a successful career in teaching.”

The ECF is to be rolled out nationally from September 2021 and the strategy says that “by the time the new system is fully in place, we anticipate investing at least an additional £130 million every year to support ECF delivery in full”.

Early roll-out of the ECF – from September 2020 – will take place in the North East, Doncaster, Bradford and Manchester, and the Education Endowment Foundation is to fund pilots from September 2019 “to consider how to effectively train mentors to support early career teachers”.

The strategy comes in response to the teacher retention crisis facing schools. While the number of full-time equivalent teachers in England’s state-funded schools has increased from 441,800 in 2010 to 457,300 in 2016 at the same time the number of pupils continues to rise.

Department for Education (DfE) figures from January 2018 show that pupil numbers in state secondary schools have risen by 69,000 since January 2013 and now stand at nearly 2.85 million. By 2025 the number of secondary pupils in England will have gone up by 15 per cent.

However, a report in November from the National Foundation for Education Research (NFER) confirms that rates of teachers leaving the profession have risen. It found that between 2010 and 2015, the rate of working-age teachers quitting increased from 10.8 to 11.8 per cent in secondary schools.

Elsewhere, the strategy outlines the development of national professional qualifications (NPQs) “to support clearer non-leadership career pathways for teachers that want to stay and excel in the classroom”. The first of these will be a “Teacher Developer NPQ” tied to the content of the ECF.

The strategy states: “Using the ECF as the foundation, we will develop specialist NPQs that flow directly from and extend expertise in the core areas in which teachers will receive training at the start of their career – assessment, behaviour management, subject and curriculum expertise, and pedagogy.”

The Department for Education (DfE) is also to introduce “phased bursaries” after trialling the approach for maths teachers last year.

Currently £250 million a year is spent on teacher training bursaries of up to £26,000 tax free, which is received up front. However, under the maths pilot, recruits get £20,000 up front with additional £5,000 tax-free payments coming in their third and fifth years of teaching (£7,500 for teachers working in more challenging schools).

The strategy also pledges to reform school accountability in order to create “the right climate” for school leaders to establish supportive school cultures.

To this end, a consultation has been launched setting out proposals to make an Ofsted “requires improvement” judgement the sole trigger for school support and to scrap the floor and coasting standards. The strategy also emphasises that “formal intervention – including forced academisation – will only ever result from an Ofsted ‘inadequate’ judgement”.

The proposals would come into effect this September and would see schools offered external support as soon as they are judged RI. Schools with consecutive RI judgements will receive “more intensive support”. It would be for the schools in question to decide whether to take-up the offer of support or whether their existing improvement plans were adequate.

In the academic year 2017/18, 221 secondary and 661 primary schools received an RI judgement. Of these, it was a consecutive RI judgement for 81 and 116 respectively.

The consultation document states: “Ofsted requires improvement is well established and understood by schools, and we would have one indicator for schools that may require support (RI) rather than multiple ones as now which can lead to action from different sources (RI, Floor, Coasting, Unacceptable Standards of Performance).”

The proposals have been welcomed by many in education. The National Association of Head Teachers said that the ECF had the “potential to transform the reality of teaching in England” and welcomed the DfE’s pledge to fully fund the extra support for teachers.

Further support for the plans has come from other education unions, the National Association of School-Based Teacher Trainers, the NFER, and the Gatsby Foundation.