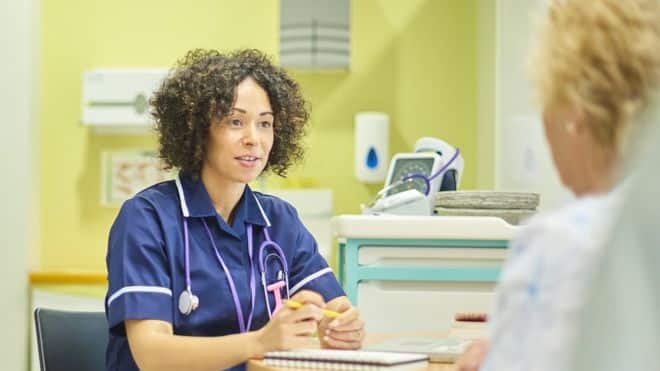 NHS bosses in England say a new 10-year plan could save up to 500,000 lives by focusing on prevention

GPs, mental health and community care will get the biggest funding increases.

The aim is to curb the reliance on hospitals, which will get a smaller cut of the budget – leading some doctors to warn they were facing a “near-on impossible task.”

The plans also include DNA testing for children with cancer, and other young people with a rare genetic disorder.

Society of Acute Medicine president Dr Nick Scriven said he was “staggered” by the plans given the problems facing hospitals.

Many trusts are missing all three key waiting time targets for A&E, cancer care and routine operations, and are struggling to balance the books.

The full details of the plan are to be unveiled later by NHS England chief executive Simon Stevens and Prime Minister Theresa May.

But ahead of the publication, NHS England confirmed a third of the extra £20bn the NHS will get in 2023 will go on GPs, community care and mental health.

Currently they account for less than a quarter of spending, while hospitals take up around half of the £114bn frontline budget.

NHS England said spending on hospitals would still rise overall, just not as quickly as other areas, and that in turn would relieve the pressure on hospitals and create a “new model for the 21st century”.

Mr Stevens called it a “practical, costed and phased route map” for the decade ahead.

The NHS said the plan would prevent “150,000 heart attacks, strokes and dementia cases”, while 345,000 more children and young people would get mental health help.

What will the money be spent on?

NHS England said that will help pay for:

NHS England believes that combined the new vision could save 500,000 lives through preventing diseases, such as strokes, heart problems and cancer, and spotting them earlier to improve the chances of survival.

As healthcare policy is politically devolved, the plan only applies to the NHS in England.

But the other UK nations are drawing up their own plans. Under the government’s funding system they are getting an extra £4bn between them by 2023.

What is this long-term NHS plan?

The prime minister asked for the plan to be drawn up when she unveiled extra funding for the health service in the summer to mark its 70th birthday.

She said a long-term plan for the next decade was needed to ensure the money was wisely spent.

Speaking about the plan on Sunday, Mrs May said it was a “historic” moment for the NHS and would help pay for “world class” treatments.

But shadow health secretary Jon Ashworth said the plan lacked both the staffing and funding to succeed and accused the government of “mismanagement” of the health service.

“The NHS needs a credible fully-funded plan for the future, not a wish list to help Theresa May get through the coming months.”

What do others make of it?

The ambitions are being welcomed. Prof Carrie MacEwen, of the Academy of Medical Royal Colleges, said: “It’s good to have a plan which sets a clear direction for the NHS.”

But unions have warned the workforce shortages could undermine the programme – currently one in 11 posts is vacant.

Unison head of health Sara Gorton said: “Without the staff, there is no NHS.

“Ministers must say more about how they plan to address the staffing shortages.”

Mr Stevens told the BBC that the NHS planned to train between 25% and 50% more nurses and had five new medical schools ready to train doctors.

He said: “We’ve got to do a better job of looking after the staff that we have. I think people are under huge stress and pressure. We’ve got to change the way the health service works.”

There is also unease that other parts of the wider health system have been cut – the £20bn promise only applies to NHS England’s budget for frontline health care.

It does not cover other areas such as training and public health. The money made available to councils to pay for initiatives such as smoking cessation and healthy weight programmes is being cut by more than 4% next year once inflation is taken into account.

What is more, the government has yet to publish its green paper on social care despite promising to in 2017.

Councils and care homes have warned care homes and home help services for the elderly and adults with disabilities are at risk because of insufficient funding.

But he added: “If we are serious about helping people to stay well and live independently for as long as possible it is vital that we also see appropriate investment and support for social care and public health.”